The world is undergoing a process of rapid urbanization. In 1950, less than 30 per cent of the world’s population lived in cities and towns. That figure has now increased to over 50 per cent and is expected to reach 60 per cent by 2030.
In terms of population numbers, the statistics are equally striking. While some 730 million people lived in urban areas in 1950, that figure has more than quadrupled in the past 60 years and now stands at over 3.3 billion. In view of these developments, it is no surprise to find that a growing number and proportion of the world’s refugees are also to be found in urban areas.
According to UNHCR’s most recent statistics, almost half of the world’s 10.5 million refugees now reside in cities and towns, compared to one third who live in camps. As well as increasing in size, the world’s urban refugee population is also changing in composition. In the past, a significant proportion of the urban refugees
registered with UNHCR in developing and middle-income countries were young men who possessed the capacity and determination needed to survive in the city.
Today, however, large numbers of refugee women, children and older people are also to be found in urban areas, particularly in those countries where there are no camps. They are often confronted with a range of protection risks: the threat of arrest and detention, refoulement, harassment, exploitation, discrimination, inadequate and overcrowded shelter, as well as vulnerability to sexual and gender-based violence (SGBV), HIV-AIDS, human smuggling and trafficking.
Until recently, the Office continued to give primary attention to those refugees who are accommodated in camps. This approach was encouraged by the organization’s 1997 policy statement on refugees in urban areas, a document that was based on the assumption that such refugees were more the exception and less the norm, as is now increasingly the case.

Recognizing the need to address the issue of urban refugees in a more comprehensive manner, UNHCR is now replacing the 1997 policy statement with the current document. 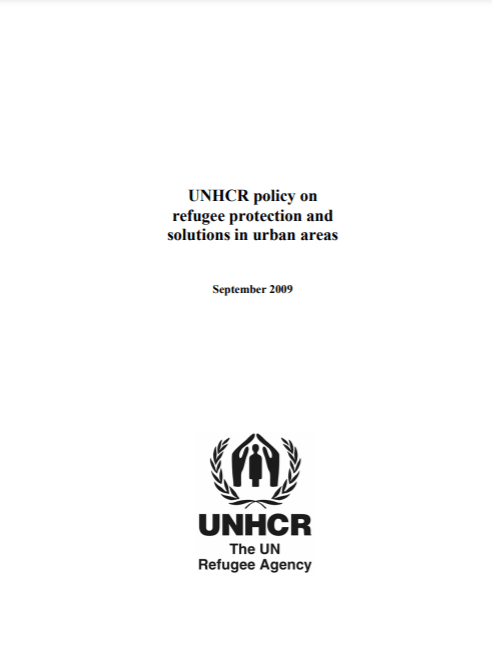