Save the Children is implementing the ‘Good Cause Campaign’ project (GCC) with the support of IKEA Foundation and technical support of Save the Children Sweden at Dhaka, Rajshahi and Satkhira district where one of the main focus is – promotion of children’s ‘right to play’. The project commissioned this study to understand the present situation of children’s right to play in urban settings from both children and their parents’ perspective and from a policy direction point of view. The study followed both quantitative and qualitative data collection method. For quantitative data, 600 households (300 children, 300 parents) was surveyed at Dhaka City considering income gaps, gender, school going/drop out children, living in slums; and conducted KII and FGDs with children for qualitative data. The study also reviewed relevant laws and policies and made a recommendation to improve children’s play rights situation at Dhaka City. The study commissioned in a context when Dhaka has been ranked the mostly populated city in the world (44,500 people per sq km) based on measurement of the density of “urban agglomerations” (UN’s Demographic Yearbook & the Daily star; 12 May’2017). Everyday 1700 people added with Dhaka City (BBS & UNFPA, 2016). 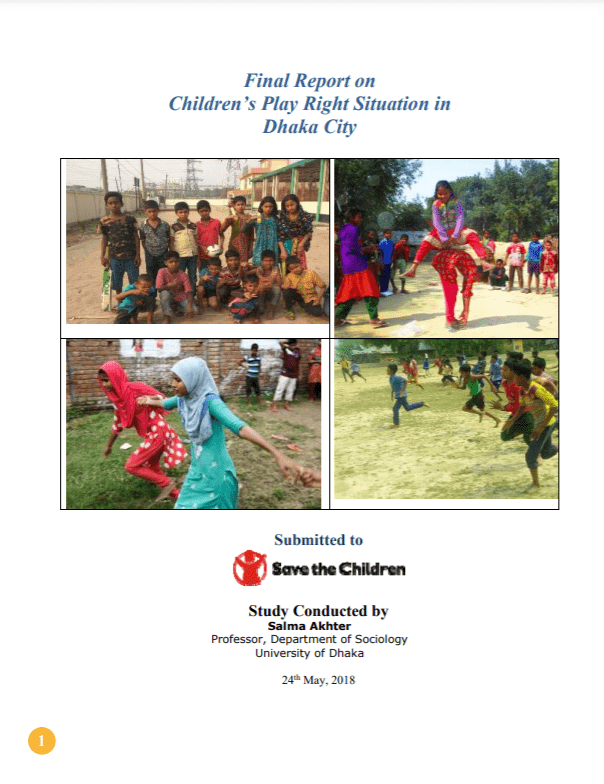