Despite being the ‘greenest’, children in slums and informal settlements have little access to the safe green spaces which are vital to their well-being, health and development. In this blog I ask, how can cities better connect these communities to national and city-level urban green investments and support grassroots greening initiatives?

Why are children in informal settlements the ‘greenest’?

Children living in slums and informal settlements are arguably the ‘greenest’ children on the planet. They live in small tight spaces using minimal resources. Their contribution to greenhouse emissions and gasses is much smaller compared to their better-off urban peers. And like other urban poor children, they also usually walk to school or use public transport, buy goods that have a small carbon footprint, often use hand-me-down clothing and recycled books, and use fewer resources in their built environment.

Yet while contributing so little to greenhouse gasses and emissions, it is children in informal settlements who bear the brunt of the impacts of climate change.[i] This seems extremely unjust. Many are climate migrants and several are at risk of being displaced from their settlements as a result of floods and landslides resulting from climate change. Children living in informal settlements also face higher levels of chronic air pollution and higher temperatures in their neighbourhoods.[ii],[iii],[iv]

All of these have devastating effects on children’s health and well-being.[v] But despite being the ‘greenest’ these children have little access to safe green spaces. In fact, when asked what they want in their upgraded or resettled housing, children often ask for trees and other forms of nature and consider these an essential feature of their built environment.[vi],[vii],[viii]

A wealth of research shows that when children and youth spend time in nature, they experience an abundance of benefits. Green spaces make children calmer and lower their stress levels, improve their physical health, cognitive abilities and emotional well-being, nurture social relationships, build resilience, and increases their concern for nature.[ix] Most of this evidence comes from the global North. We cannot say for sure that these benefits will accrue in similar ways for children in informal settlements. They face many other deprivations such as insecure tenure, inadequate access to quality water and sanitation facilities, and good schooling. Nonetheless, it is fairly obvious that at the very least, access to safe green spaces can provide shade and perhaps food, and foster play.

The paradox of nature for children in informal settlements

Children’s experiences of nature in slums and informal settlements – both positive and negative – are intertwined with the ‘informality’ of settlements. For example, edge settlements near forests or rivers give children more access to green and blue spaces than their better-off counterparts living in high-rise buildings. But this also makes these settlements more climate sensitive and prone to disasters such as forest fires or rivers flooding.

Similarly, these children can dig in the mud outside their homes, climb trees and play in and with various forms of nature which is seldom available in planned settlements. But this access is not without its cost. While children enjoy splashing and cooling off in the puddles of water that the rains bring it is also accompanied by a deep-seated dread that the rains might flood their homes or that, come morning, they might have to trudge through flooded streets to reach schools where they are teased by other children or reprimanded by their teachers for their shoddy appearance.[x]

Young girls use the cover of nature for their daily toileting needs. But this green cover can also expose them to other threats such as snakes or men lying in wait to molest them.[xi] For younger children, found forms of nature such as twigs and leaves, stones and mud offer myriad opportunities for creative play. But more often than not, these are interlaced with garbage or sewage that expose them to a range of health risks. In this way, the lack of basic services such as toilets, proper drainage or waste removal routinely mediates how children experience nature and the outdoors.

Slum dwellers are rarely integrated into city-level blue and green infrastructure plans. For example, in 2011 the city of Delhi planted over a million trees, and more recently, has rolled out several programmes to preserve and protect trees as well as increase green cover. However, there is little evidence of the benefits of this programme reaching the most vulnerable residents in informal settlements.[xii] Another recent study in Dhaka shows that government-led urban greening policies threaten to displace informal settlement dwellers from the urban core of the city and in the process undermined several informal greening practices present in the settlement (such as small gardens and container gardening).[xiii] In two slums in Accra in Ghana, green spaces were seen to be reduced by 83% and 92% over a span of eight years, despite slum residents stating they highly valued their green space. This loss was largely attributed to the neglect of slums in urban planning processes and systems.[xiv]

However, many rural–urban migrants have deeply rooted connections with the natural surroundings they grew up in. They tend to recreate and relive these connections in their new urban surroundings. A study in Dhaka shows that residents retained valuable knowledge from their rural farming origins and used this to grow vegetables, maintain informal roof and backyard gardens, as well as use trees as support for dwellings, resting and socialising. Residents were seen to value these spaces highly.[xv]

Urban farming in settlements can provide much-needed nutrition and food security to the most vulnerable children. In Soweto in Uganda, an NGO called Children on the Edge has supported slum dwellers in growing their own food using vacant land, containers and small spaces. The gardens produce a dozen different crops including cabbages, spinach, tomatoes, onions, carrots, green peppers and maize. Of this produce, 60% goes to 140 children in the child-friendly space (CFS)[xvi] in the slum, many of whom are from child-headed households. Twenty per cent is sold to support educational resources at the CFS and the remainder is shared amongst the 25 community members who tend the crops. This effort has ensured nutrient-rich food is available for the most vulnerable children in the slum. But it has also generated income and provided skills and resources to community members.[xvii]

Another example is in Chiang Mai, Thailand. The COVID-19 pandemic has led to a large decrease in incomes in informal communities and threatened their access to food. To address this challenge, the community engaged with city officials, college students and school children to convert a local landfill into a community garden. This resulted in increased food security for informal communities, beautifying their local environment and enabling children to gain first-hand knowledge about growing food.[xviii]

Engaging with nature can also give a sense of self and purpose for at-risk youth. In Nairobi, a youth-led organisation has taken the initiative in cleaning up plastic waste in their slum in Kibera. This organisation engages previously incarcerated youth to give them a sense of purpose as well as re-establish their ties with the community. Their organisation currently has 33 members and works with over 300 youth in Kibera.[xix]

These are a few examples of greening practices that involve children and youth in slums and informal settlements. But there are several more initiatives taking place across the world such as hanging birdcage gardens in slums in Thailand, hydroponic gardens in poor settlements in Lima and Chad, vertical gardens in an elementary school in a slum in San Paulo, waste-to-energy solutions in Kenya, and organic container food farming in slums in Mexico city. This implies there is widespread interest and need for generating productive greenspaces in slums.

There is a lot that can be done as we move forward to connect national, regional and city-level urban green investments with the poorest communities. 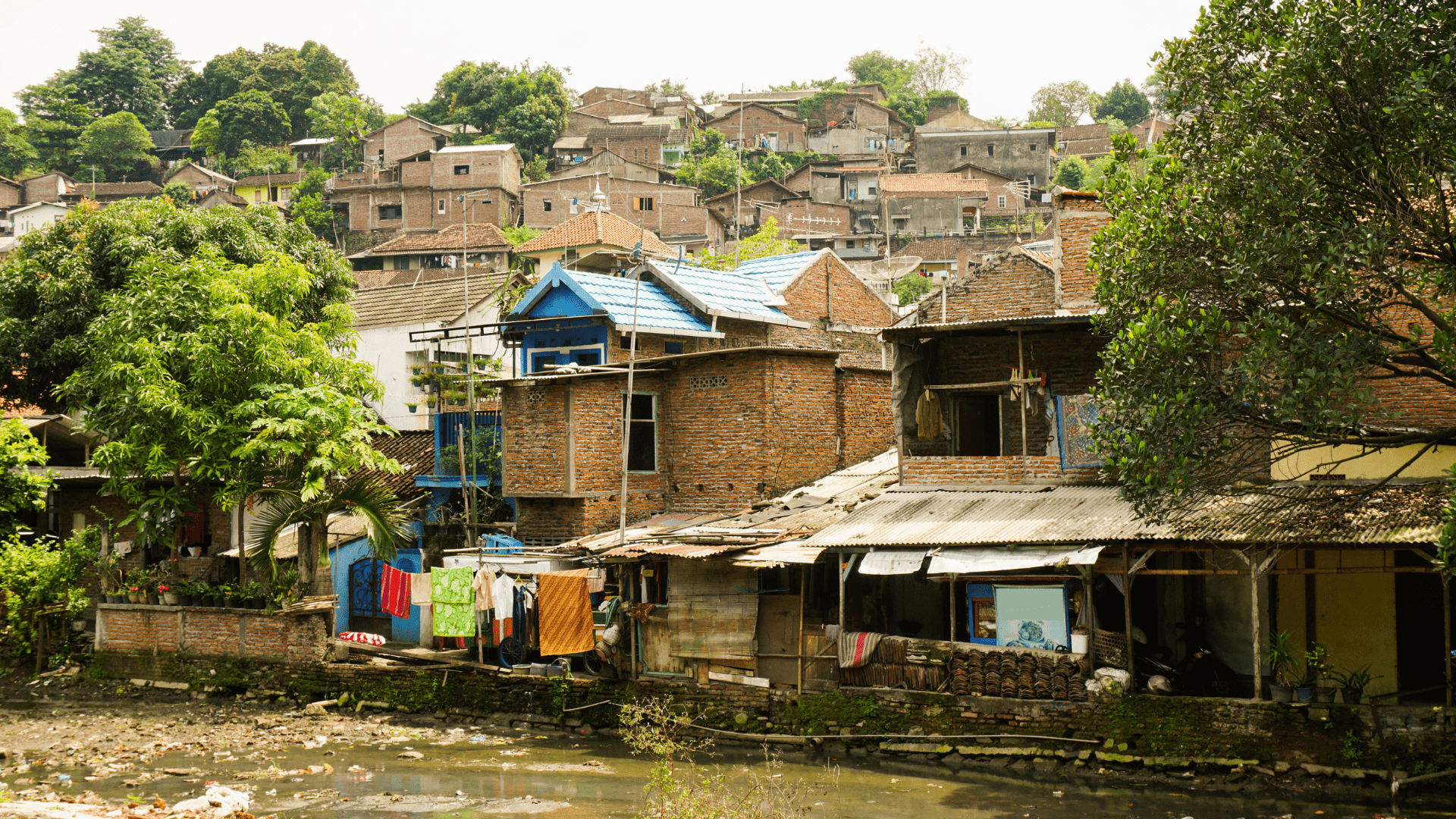 Anupama Nallari is an independent research consultant who works at the intersections of child well-being and urbanisation, poverty, early childhood settings and public space. Anupama.nallari@gmail.com

[i] Ananthapadmanabhan, G, Srinivas, K and Gopal, V (2007) Hiding behind the poor: a report by Greenpeace on climate injustice. Greenpeace India. https://bit.ly/39fS87P

[x] Nallari, A (2014) The meaning, experience, and value of ‘common space’ for women and children in urban poor settlements in India. PhD dissertation. City University of New York. https://bit.ly/3nr376o

[xi] Nallari, A (2015) “All we want are toilets inside our homes!”: the critical role of sanitation in the lives of urban poor adolescent girls in Bengaluru, India. Environment and Urbanization 27(1): 73–88. https://bit.ly/3lk0z7s

[xvi] Child Friendly Spaces are safe spaces that are established in the context of humanitarian crises to provide food, education, safety and protection for children at risk.

[xvii] Children on the Edge (25 September 2013) We plough the fields and scatter. https://bit.ly/3leNFHX

Note: This article presents the views of the author featured and does not necessarily represent the views of Global Alliance – Cities 4 Children as a whole