Parents in Nairobi tell their stories about how climate change and air pollution are affecting the health of their children – and share their vision for a healthier, cleaner future.

Children are particularly vulnerable to the health impacts of climate change, including the effects of heat and air pollution. African cities, including Nairobi, are facing growing challenges as global greenhouse gas emissions continue to rise, disproportionately affecting populations who have done the least to contribute to climate change. This is a key issue in urban areas: of the 4 billion people living in cities today, children represent over 30%. By 2050, this will rise to 70% of 6.7 billion urban dwellers.

Air pollution linked to the burning of fossil fuels contributed to 1.1 million deaths in Africa and more than 28,000 deaths in Kenya in 2019. Of these deaths, 14%  were children aged under 5 years old. At the same time, heat-related child mortality in Africa could double by mid-century without rapid and deep cuts in global emissions, with children in cities being particularly at risk. Click To Tweet Transformative climate action can, however, bring huge health benefits to children living in cities around the world, including in Nairobi.

Ahead of COP27 in Sharm el-Sheikh in Egypt, parents of babies and young children living in Nairobi took part in a healthy cities co-design workshop as part of the Children, Cities and Climate Action Lab, a global initiative led by researchers at the London School of Hygiene & Tropical Medicine (LSHTM) in partnership with YLabs and an international group of youth advisors. Mary, Shammim and Elizabeth are three parents who took part in the workshop and shared their experiences of living in a warming urban environment and their concerns about the effects of heat and air pollution on the health of their children. They also had ideas and hopes about what could be done to improve their cities for their children and create a healthier, more sustainable future. 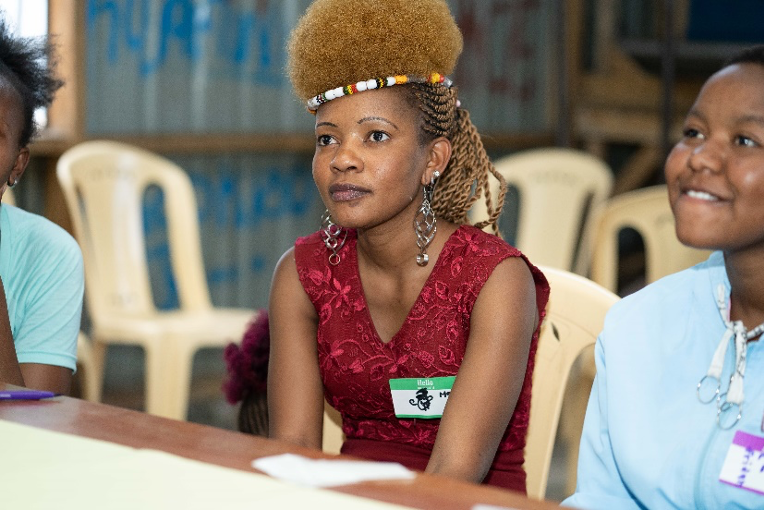 Mary is a 20-year-old mother living in the Mukuru neighbourhood of Nairobi. Mukuru is a low-income and mostly unplanned settlement that borders a heavy industrial area. It is home to more than 700,000 people. Mary works as a roadside seller of eggs and lives in a matabi (a small sheet-metal house) next to a major road. She has a two-year-old daughter named Precious. Both she and her daughter have asthma and have needed multiple hospital visits due to indoor and outdoor air pollution exposure. Each visit means taking a day off of work and a day of lost income for her family. Mary says,

When I went to the doctor for my little girl’s breathing problems, they said it was because of the air where we live. We shouldn’t get sick because of where we live in our city. My hope for the future is that my kids and myself will not get sick as often. I want my daughter to live with clean air and clean water. 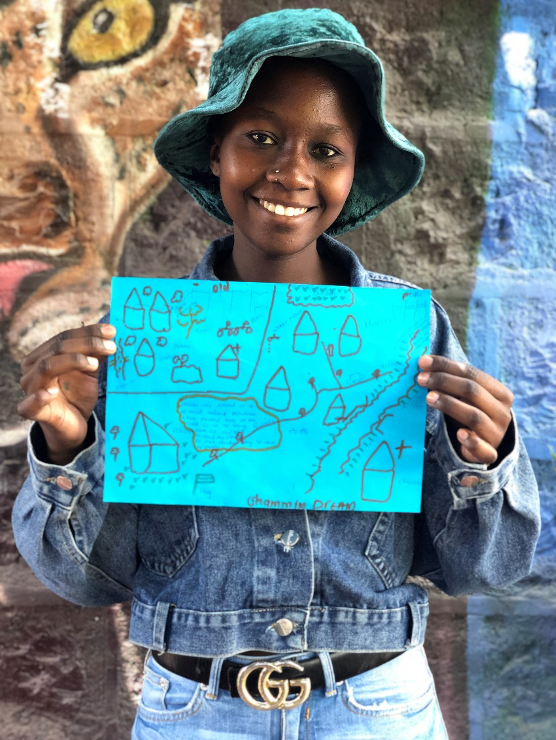 Shammim holding up a drawing of a healthy city © YLabs

Shammim is a 24-year-old mother from Dandora. Dandora is a low-income neighbourhood 11km from Nairobi’s center with a population of just over 140,000. Her daughter Trisha is three years old and loves singing and playing. They live near the Boma dump, the largest open landfill in Nairobi, covering nearly 40 hectares. Toxic smoke from spontaneous combustion of the giant trash heaps frequently drifts into their home, causing respiratory illness, eye infections and rashes for baby Trisha and other family members.

Shammim hopes for a cleaner future for her daughter, with safe play areas that she herself lacked as a child and trees so that Trisha can have a ‘fresh environment with no air pollution’. When asked what she wishes decisionmakers would do to improve living conditions in Dandora, Shammim says:

These mounds of trash do not come from us – they come from other areas [of Nairobi]. But we are the ones who suffer and pay the price. The government can help to ensure the environment stays clean.

Open landfill sites like the one in Dandora cause serious health burdens for nearby residents and emit massive amounts of planet-warming methane. Waste management is both complex and expensive and requires action from the private and public sectors and civil society. One way to tackle the issue is for governments to invest in sustainable, planet-smart urban waste-management systems. That way, Nairobi can take a lead in creating a healthy urban environment for the 630,000 children in Nairobi like Trisha. Elizabeth with her two-year-old son © YLabs

Elizabeth is a 24-year-old mother, also from Mukuru. She works in a small shop to provide for her children, including her two-year-old son. She has noticed the days getting hotter in Nairobi in recent years and worries for herself and her young child. With no indoor cooling in her metal-roofed house, it is hard to find refuge from the heat. As Elizabeth says,

When it is too hot you cannot be productive in either work or at school […] but then you also cannot sleep at night and the babies cry without stop.

In megacities like Nairobi, rising average daytime and nighttime temperature is a serious public health concern, particularly for young children who have a harder time regulating their body temperature. Investing in urban cooling measures such as planting trees, reducing the amount of black tar asphalt and improving heat refraction capabilities of roofing and quality of housing ventilation in informal settlements, are actions that Nairobi and other cities can invest in to help children adapt to a changing climate. As Elizabeth says,

The future I want for my child looks like this: there are planted trees along the roadside for fresh air and cool breezes, and the schools around also have trees planted everywhere so that my child grows up in a space he can thrive in.

Mary, Shammim and Elizabeth face many concerns – but they should not have to tackle them alone. Actions at local, national and global levels to adapt to climate change and cut emissions, such as shifting from fossil fuel-based power to renewables, improving access to and greening public transport, cutting industrial emissions, investing in sustainable waste management systems, and creating more urban green spaces, will reduce the burden and help improve the lives and health of children and parents living in Nairobi and cities around the world.

The public engagement workshops were coordinated by YLabs to help inform the Children, Cities and Climate Action Lab at LSHTM. For more information, see www.lshtm.ac.uk/research/centres-projects-groups/children-cities-and-climate

Nzisa Kioko is a human-centered designer and researcher at YLabs who is passionate about solutions that bring impact to the users. She is has a Bachelor of Arts in Design from the University of Nairobi and the Nairobi Design Institute and has been working at the intersection of design and research to create, test, and co-design experiences since 2018.

The Ideas4Action series aims to inspire with ideas that have worked in other cities and countries so that you too, can take action in your own city. Read more of our blogs here.

This work is licensed under a Creative Commons Attribution-NonCommercial-NoDerivatives 4.0 International License. When re-sharing this content please ensure accreditation by adding the following sentence: ‘This blog was first published by the Global Alliance – Cities4Children (www.cities4children.org/blog)’