The results from a recent survey designed to engage young people as primary stakeholders in improving safety in their cities are striking. 82 percent of young people aged 15-24 who took part said they could ‘never access safe public transport’, while 69 percent said they ‘never felt safe from harassment’ in public spaces. The results come from a survey which accompanied the Global Youth Safety in Urban Environments Competition; the kick-off activity led by ICLEI for Global Infrastructure Basel Foundation (GIB)’s new Safe and Sound City Program (S2City).

This competition, which ended in September 2021, served two aims: 1) to gather insight on young people’s subjective experiences with urban safety to inform the program scope moving forward; and 2) to give young people the chance to raise awareness of their safety concerns through art. Although the submissions show there is still significant work to be done for children and young people, they also show that there’s a new generation of thought-leaders, who are clearly passionate and driven to inspire change.

The full results of the Youth Safety Competition are summarized alongside infographics and visualizations, useful for key stakeholders and policy makers to learn more about the challenges young people face in urban environments. The results are also the departure point from which GIB will conduct further local surveying, to ensure a contextually relevant approach to engaging young people in eventually ideating and implementing solutions to safety issues.

150 young people aged 15-24 from 33 countries participated in the competition. In addition to answering the survey, participants shared an original photo, video or drawing of a safety issue relevant to their daily life. The entries are no less striking than the survey results. They’re deeply poignant, beautiful reminders that there’s life among traffic; that young people are trying to live and thrive in cities choked with pollution; and for so many, kids are just trying to find a safe space to play, study and grow up safely.

Among others, organizers received sketches of crime or violence taking place; photographs of dangerous traffic skirting perilously close to playing children; and depictions of waterlogged cities and rubbish strewn streets, showing life paused while yet another flood engulfs a road. 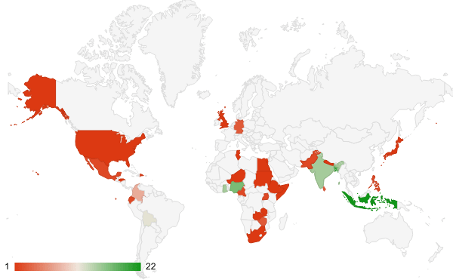 Twenty finalists were selected by an international jury and shared on ICLEI’s Facebook page for public voting. The public vote determined the final ranking, which was announced on 13 September 2021 via livestream. Scroll through the below slideshow to see a representative selection of winners, finalists, honorable mentions and participants.

What were the key takeaways from the competition?

The results from both the survey and the creative submissions highlighted several critical elements. Of those who took part in the survey, most say they are affected by deficient infrastructure, poor waste management, air pollution and crime/violence. Looking at a continental level, young people from Asian countries tended to flag pollution (air and waste), infrastructure and health as issues, while those across South America and Africa also reported feeling most affected by crime, sexual harassment and violence. All the aforementioned safety concerns were conveyed in the finalists’ entries, some of which are included in the slideshow above.

The results also present an opportunity to learn about the challenges of running a global competition. We’ve covered the learnings in a fuller blog and analysis. But, to briefly summarize, organizers reflected on several aspects: first, different prize categories for different media types (e.g. video to be judged against other videos) can support a fairer evaluation; and, second, to be mindful of which platforms young people use when asking them to vote. Not everyone uses Facebook, and even for those who do, how can we work to prevent such competitions from turning into popularity contests?

And the other key learning? There are some incredible young artists spread across the world. We’re delighted that young people chose to make their voices heard.