This International Women’s Day, the Global Alliance – Cities4Children, asked member organisations about the work they do with women and girls in cities around the world. We also asked them to flag any surprising statistics, critical projects, or issues that they have worked on and which predominantly affected girls.

Finally, our partners shared some reports or studies that they had published recently that were relevant to an audience interested in issues faced globally by women and girls. Here are some highlights from our members for International Women’s Day 2022. 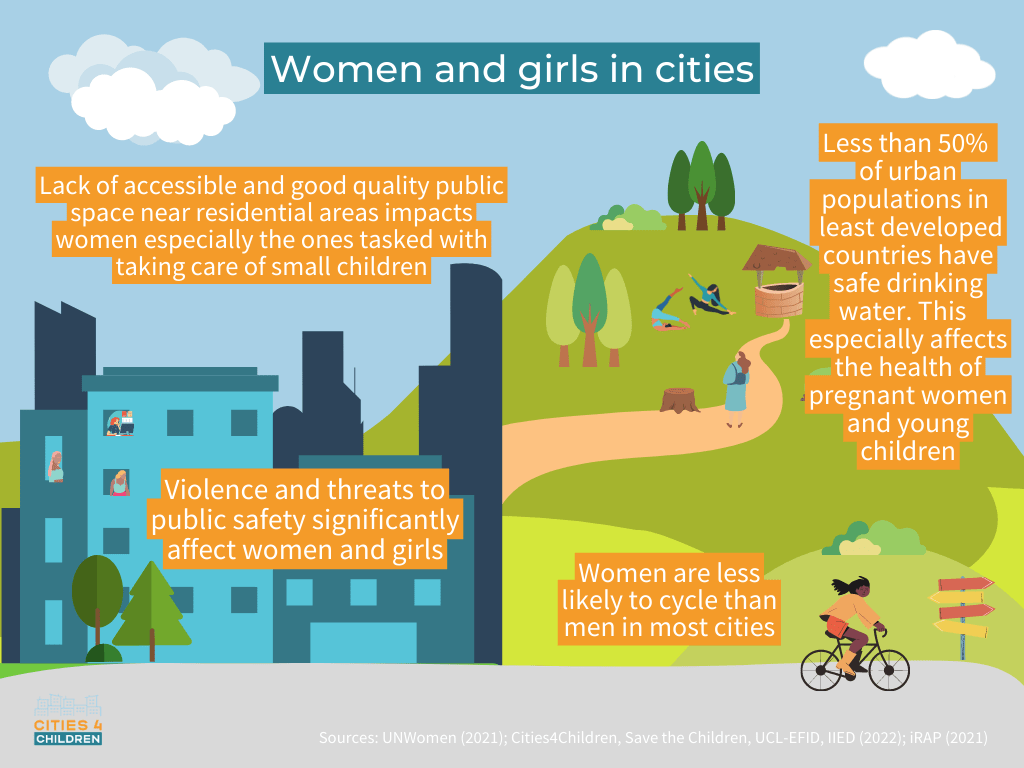 Some of the issues faced by women and girls

Across our member organisations here are some of the issues that came up:

Global Alliance – Cities4Children’s member organisations have brought out a number of reports over the past year, many of which are related to creating safer cities for women and girls.

Supporting participatory processes to plan a city for everyone

Her City is a UN Habitat initiative about engaging women and girls in urban development to ensure that their voices are heard. Her City supports participatory processes that are important when it comes to planning a city for everyone.

Links between children and WASH

Cities4Children in collaboration with UCL, Save the Children and IIED published a report highlighting links between lack of WASH (Water, Sanitation and Hygiene) and well-being of children in slums.

Some highlights from the report:

Women in power can lead to drop in infant mortality

SALURBAL, or The Urban Health Network in Latin America and the Caribbean, conducted a study on ‘Infant Mortality in Latin American Cities’  that showed that the presence of a higher proportion of empowered women, is linked to lower infant mortality. SALURBAL researchers conducted a study focused on Brazilian municipalities, which showed that reductions in municipal infant mortality over time were associated with the election of a woman in elected offices in the municipality.

Another study (paper and brief)  examined the association of measures of women’s empowerment with infant mortality in 286 cities in 9 Latin American countries and showed that:

Researchers found that this association is likely linked to efforts made by these elected officials to expand access to primary health care and conditional cash transfer programs within their municipalities.

Unique barriers faced by women and girls in cities

Arup has been working on a publication focused on designing cities for, and with women, alongside UNDP and the University of Liverpool.

These are just some of the reports, studies and facts released recently by our partners. At Cities4Children – The Global Alliance, everyone understands the importance of equality. Making life in cities better for women and girls, is making life better for humanity and for children. Read more about our partners’ work here.