This presents many problems. A scarcity of accurate and relevant knowledge can slow efforts to improve the lives of urban children living in informal settlements and contribute to unequal resource distribution such as the availability of schools and  water and sanitation infrastructure. Problems confronted by children living in informal settlements are not fully documented. Therefore, understanding key statistics such as how many children live in an area, what resources they or their families have, and the challenges they face is fundamental to improving their lives.

Simultaneously, it is recognised that there are “opportunities to capitalise on efficiencies of scale and proximity, on urban concentrations of resources, and on the proven creativity and resourcefulness of people in poverty, especially when they are organised and when they have the space to explore what works for them”.

One of the ways to address the scarcity of reliable data is through the co-production of knowledge, a recognised strategy employed in urban informal settlements. Co-production generally means to engage in “supporting and building on the self-help strategies of people in poverty”. Co-producing knowledge involves a collaborative effort between two or more actors such as local governments, academics, NGOs, citizen groups or others to survey, map, assess and identify both resources and challenges within a community. One example is a local community group mapping out their neighbourhood including where the toilets and water sources are located, and which are accessible to children of different ages or sizes. They could then use this data to identify ‘gaps’ in the access to water, sanitation and hygiene (WASH) for small children and make a plan to address these gaps by ensuring that children of all ages have access to WASH infrastructure.

Why do we need co-production?

Local governments often don’t have the capacity or resources to address the challenges of urban poverty, even though they have a crucial role in assisting urban poor residents. Other entities such as NGOs, researchers, the private sector and international agencies often play an important role in supporting the relationship between urban citizens and local governments. Co-production processes in partnership with local governments and urban poor citizen groups, which are also supported by third party actors, are critical to improving local governance. These groups hold local authorities responsible to meet the needs of the youngest urban residents such as safer streets and providing space to play. Co-production of knowledge which includes honouring local knowledge is key to taking the first steps down this path. It deepens citizen engagement, supports inclusion, recognises the value of multi-agency collaboration and often leads to partnerships that improve living standards and conditions.

Knowledge co-production processes must include children and youth as meaningful participants. One good example of this was in Mozambique, as part of a collaborative data collection effort between local community children, active local associations, the Municipality of Maputo, UNICEF, and UN-Habitat. As part of this effort, children were provided digital technology to document their daily movements throughout the community. The children gathered in-depth data that differed from how adults experience their neighbourhood.

However, tensions may exist in the co-production of knowledge. The following lessons that have been learned over time can inform future activities between local mobilisers and governments (adapted from Mitlin et al 2019):

“When they (poor urban communities) share the data (that they own) with government, they are able to create new relationships — and even institutions — that make the poor integral role players in the decisions that affect their lives”.

The Vusi Ntsuntsha housing development project, part of SDIs Know Your City Campaign in the Western Cape Province of South Africa, provides an excellent example of knowledge co-production. A key component of the project is a collaboration between the local community, the provincial government and local support NGOs to enumerate and profile residents of settlements. In addition, the youth of the Know Your City TV (KYCTV) program, which empowers youth through the use of media, partnered with the Vusi Ntsuntsha project by recording data and media during workshops, meetings and data collection processes.

The community driven process of data gathering included demographic data on residents, how many residents live in each household and the resources they have or lack. The data ensured that the community became ‘visible’ in a tangible way and provided a practical way for the Western Cape Provincial Government to screen and prioritise households that would receive housing grants. By November 2019, over 400 beneficiaries had been enumerated and verified as formal members of the housing project.  This successful process of co-producing knowledge has enabled the community to create useful data, gain crucial knowledge, understanding and ownership of the enumeration process.  One of the ‘mamas’ of the project, Thandeka Gloria Thunyiswa, said she became involved to get a larger house so that her grandchildren can have somewhere to be in her home, and for her children, one of whom is disabled, to have a place to stay when she dies. 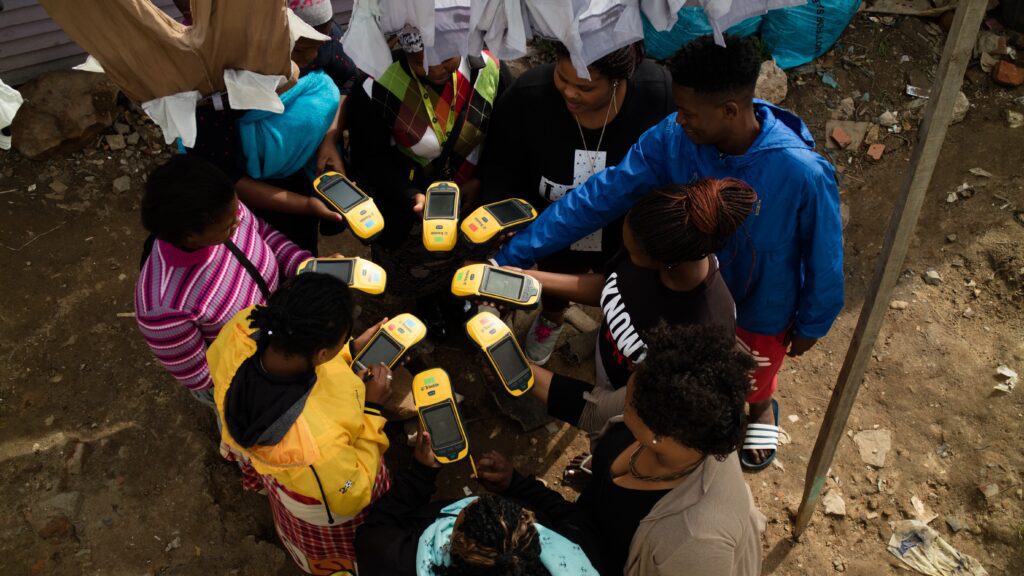 Over the past six years, as iNGOs and other child-focused organizations engage and define their roles and processes working with marginalized urban communities, many have adopted urban-specific policies and procedures. Each of these efforts promote engaging with community organisations to identify and define the resources they have and the challenges they face. Co-producing knowledge and gaining a deeper understanding of the tensions that the process holds, is a promising avenue for scalable improvements in the lives of marginalized urban children.

This work is licensed under a Creative Commons Attribution-NonCommercial-NoDerivatives 4.0 International License. When re-sharing this content please ensure accreditation by adding the following sentence: ‘This blog was first published by the Global Alliance – Cities4Children