Growing up in a city full of cars can be damaging, and not just physically. It gives the impression that cities with cars are unchangeable, and will always be there.

Even among children’s toys, cars are given greater dominance than bikes. Take Lego, for example. Until this year, after a successful campaign started by urban planner, Marcel Steeman, Lego City packages didn’t include bike lanes. Instead, cars were getting wider and bigger, and bikes were disappearing. He argued that not including bike-lanes in a toy set aimed at children, would make it difficult for young people to ever conceive of a world without cars. 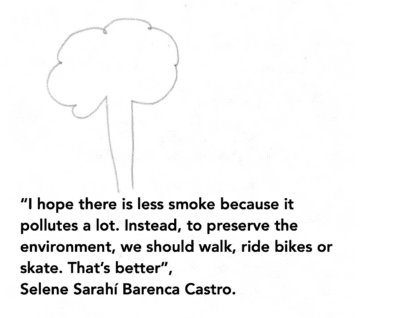 In Zapopan City, in Central Mexico’s Guadalajara Metropolitan Area, a similar change was taking place. The question asked in the Mobility and Transportation Department of the Zapopan City Government, in Mexico, six years ago, was: after growing up in a city full of cars, how can we change the way children think about pedestrians and cycling? The Department was created initially to start thinking and planning about transforming the city into a place where people felt confident using alternative forms of transport. They asked more questions: what are the environmental implications for the future of cities who have taken over public spaces for private cars? How can we educate children to show that they are also pedestrians, that safe, healthy and sustainable mobility is a human right and that there are many ways to exercise it?

As a result of these questions and the birth of the new department, the Traffic Wrestlers program was born in October 2015. It started life as a road education and environmental awareness program, designed to teach children about sustainable mobility and how to respect public space. It did this by running performances of small productions and interactive educational activities held in schools, but also in public: Traffic Wrestlers also performed at street intersections, in parks, public spaces and other public areas.

The plays consisted of a group of professional actors and improvisation experts, who created stories about the climate crisis, road safety, sustainable mobility, and the importance of public space. The main characters in the stories are two wrestlers, a man and a woman. Wrestling is part of Mexican popular culture. Together, the two characters would fight some of the enemies of road safety and sustainability, including ‘distraction’ when driving, ‘laziness’, when walking or cycling, or ‘stress’, which could lead to excess speed and road chaos.  The shows were made into theatrical representations (a format chosen due to the programme’s target audience), where the traffic wrestlers triumphed over their enemies and encouraged children to get engaged and become traffic wrestlers too.

“Wear your seatbelt and don’t use your phone!” Zapopan City Traffic Wrestlers

It sounds simple enough, but for children who have rarely had to challenge the status quo, it struck a chord. The broad objective of the program is to improve the city’s road culture and improve the life of all citizens. It’s also a way to celebrate different modes of transport, from walking to cycling, and encourage reducing dependence on private vehicles.

The target audience of the Traffic Wrestlers is children aged between 6- and 15-years old living in the Municipality of Zapopan, Jalisco, by organizing interventions in every classroom of every school throughout its whole territory. As of today, there have been more than one thousand performances, 568 schools visited, and an audience of half a million people, of which 206,006 have been children from primary and secondary schools. 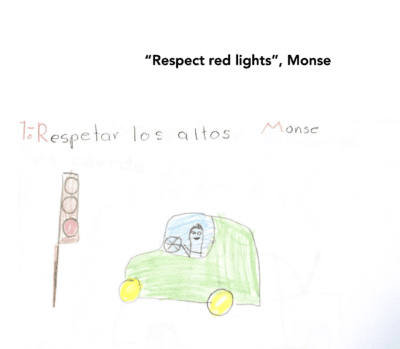 Traffic Wrestlers celebrates different modes of transport, from walking to cycling, and encourages reducing dependence on private vehicles. Other projects at the Transport Department, such as Educavial, help to make adults actively understand how they can best share public space respectfully.

Traffic Wrestlers was acknowledged by C40 Cities as one of the one hundred most innovative initiatives to combat climate change in 2019.  Improving the infrastructure was key in addition to the Traffic Wrestlers programme, but it was not part of it.

The Department of Mobility and Transportation has built 70km more cycle lanes in addition to the 50km completed by 2015: these will continue to be expanded.  110 more kilometres are planned by 2024, making it possible to safely bike throughout Zapopan and the rest of the Guadalajara Metropolitan Area, where more cycle lanes are also being built.

During the pandemic, Traffic Wrestlers was reshaped to keep reaching children during lockdown. Therefore, the Zapopan Mobility and Transportation Department has created a series of six animated short films available to share and stream for everyone who might be interested. Nevertheless, the Department has first handedly witnessed the power of theatre to engage children, and it is its mission to physically return to classrooms, as soon as the pandemic permits it.

Watch the videos here and share with any Spanish-speaking children you know.

The City of Zapopan Department of Mobility and Transport was created in 2015 and is in charge of promoting active and sustainable mobility through educational and cultural interventions, private-public collaborations for public space improvement, and infrastructure planning and building. Traffic Wrestlers is one of its top educational programs.

The Ideas4Action series aims to inspire with ideas that have worked in other cities and countries so that you too, can take action in your own city.