We interviewed Pooja Rai, the co-founder and CEO of Anthill Creations, to ask her about her journey to improve the lives of children through building hundreds of playgrounds across India.

She adds: “I once spoke to a headmaster during one of our very first playground designs who said he doesn’t need a playground. That the children would get distracted, and just want to go outside and play. It would ruin their study. But this wasn’t the case, and when the playground was built he could see the impact in front of his eyes. School attendance increased as children came to play before the school day started. There are immediate, positive benefits to installing a playground.”

Play is critically important for child development. It teaches children important skills and allows them to have fun. Respecting children’s right to play is noted in Article 31 of the UN Convention on the Rights of the Child (UNCRC): Children have the right to relax, play and to join in a wide range of leisure activities. Listening to and observing children’s needs is reflected in Article 12 and 13 of the UNCRC, and that’s something Pooja Rai has taken to heart as she consults for her new playgrounds.

The idea for Anthill Creations started when Pooja was in college studying architecture, and she would volunteer at a local school for underprivileged children. “I saw kids using slippers to play badminton with, and playing in broken cement pipes. So I spoke to my friends and we talked about creating a playground.” 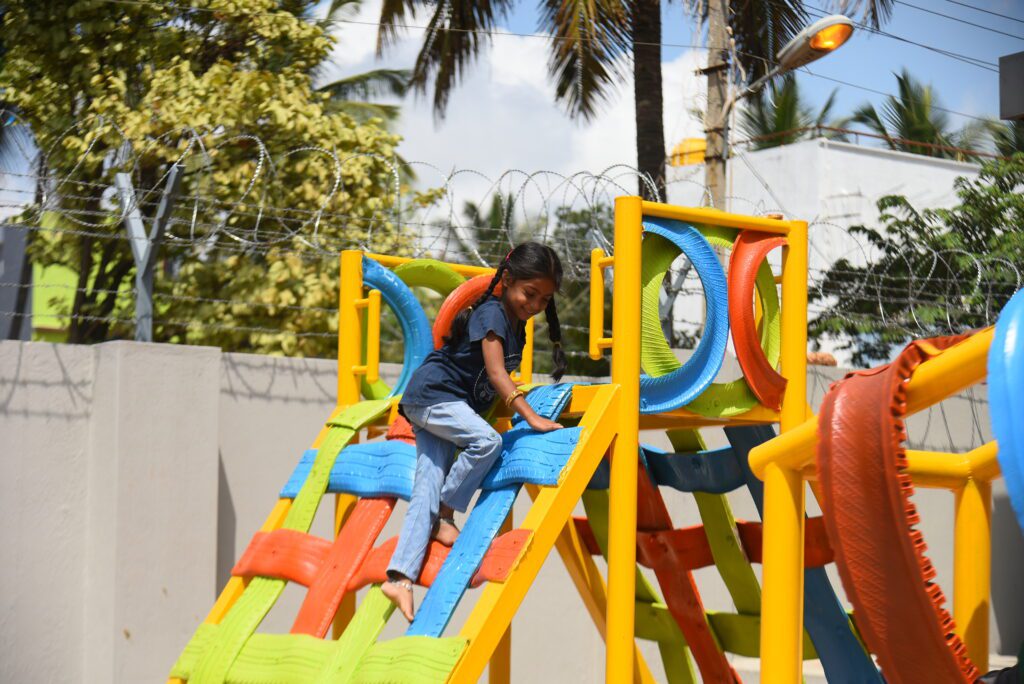 Pooja had been really interested in the idea of upcycling materials while she was studying, so she looked at how feasible it would be to make a playground out of tyres. She reached out to some local tyre companies and explained her idea – they agreed to sponsor the project, and the first playground was born.

“At first we didn’t realise what a big problem it was. We just wanted these specific children to be able to play. But over time, this changed. We understood how vital play was. When I visited that first playground again after some years, I saw that the children were still playing, and they were being more creative with their games.” Before, Pooja had noticed that the games they played had so many rules. They were restricting themselves with the way they played. Now their games were more fluid and more creative, which felt like a real success.

As Pooja’s journey continued, she saw that in India people don’t always see play as something beneficial. “So many people just thought play was a distraction from study. People didn’t see the benefits, that it could be part of learning. After we’d opened that first playground, we saw that lots of children who had never come out to play, were suddenly playing. There were seesaw tunnels, tyre caterpillars – lots of different ways to play. They used their own imagination and they never got bored.”

Pooja’s inspiration to design great play spaces comes from many things. Her architecture training certainly plays a role, but she also learns by observing the way children play. To understand how children interact with the playground equipment, she spent time playing games to understand what play means for each person to find out what they needed from their spaces. “Every time we spend time with children, we learn something new. These learnings are then passed on to the next project, and the next. If you design well, people will come and play.” 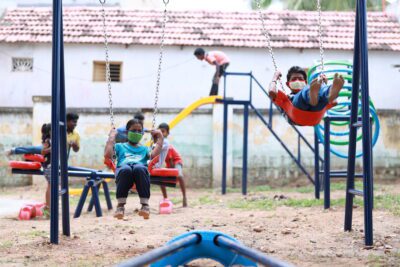 Today, Anthill has 15 permanent team members. They’ve built 300 playgrounds across India and influenced the lives of 200,000 children. Pooja knows that Anthill can’t personally manage each and every project, so they look towards community support to maintain each development. Anthill are responsible for the safety of the playgrounds for the first year, and then support transfers to the community champion. This could be a headteacher or a sports teacher. It must be a person who has expressed interest and understanding in knowing children need a space to play.

Designing safely and creatively is also part of the learning journey. “When we design playgrounds, we rigorously adhere to international safety standards, even though we’re using upcycled materials. That means no sharp edges and everything is at the correct height. We make sure we do a quality check too, and talk to schools. If there is any risk, we put a board up outside the playground.”

“We’ve used bamboo, cable drums and plastic to progress our designs. We also work closely with local craftspeople who have experience with local materials such as bamboo. When we went to work in areas near forests, we’d had no experience with bamboo before, but we learned how strong, versatile and cheap it could be.”

Building a playground with upcycled materials is relatively inexpensive – around 300,000 INR (4200 USD). Almost 90 percent of funds for the playground’s construction come from companies’ CSR (Corporate Social Responsibility) budgets: by Indian law they must allocate two percent of their profit each year to corporate social responsibility. Anthill Creations has received donations from 60 companies, and also relies on CSR volunteers to come and build the playgrounds. “However, this can be challenging because some companies want playgrounds in the cities where their offices are based, which makes sense. However, this isn’t always where the greatest need is,” adds Pooja. 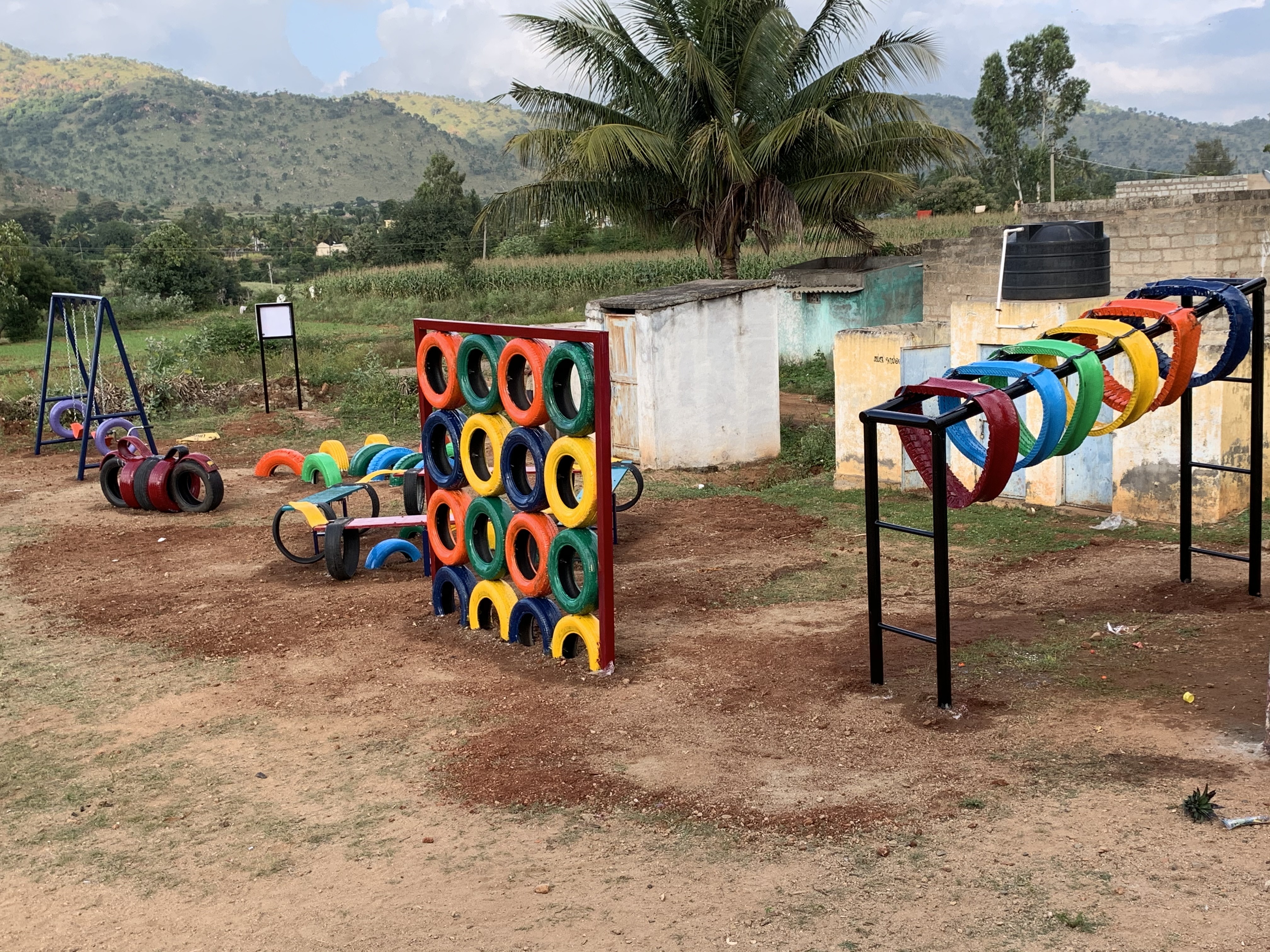 Another challenge can be finding enough land to build playgrounds on. “Rurally, there’s little issue,” says Pooja. “But in slums space can be hard to come by. Then we use walls and old dumpyards and clear that out. Often playgrounds are in schoolyards, and they’re used by several schools nearby. We do the best we can with what we have.”

And of course, any space to play is important, even if that’s just a common space in an informal settlement. Anthill does have plans for expansion in the future. Outside of India, they’ve already helped build playgrounds in Peru, Columbus (USA), Nepal and Haiti, thanks in part to making their designs open-source, explains Pooja. “Only if we continue to make our designs open source will we keep learning from each other. We want to make sure that thousands of children have access to play.”

The Ideas4Action series aims to inspire with ideas that have worked in other cities and countries so that you too, can take action in your own city. Read more of our blogs here.