What are Open Streets? Why are they important for children, vulnerable groups and cities? What are the key ingredients that make Open Streets successful in cities? On 19 April 2022, Gil Peñalosa hosted an online webinar called Open Streets/Ciclovías: Meeting as Equals – Public Health Benefits where he and Dr. Olga L. Sarmiento addressed some of these questions.

What are Open Streets?

Open Streets involve strategically selecting city streets, temporarily closing them to cars and opening them up for people. They are part of a wider global movement of temporary street closures done in cities in partnership with a range of different actors including grassroots and civil society organisations. These could be a one-off event, annual events or more regular monthly or weekly initiatives. Other examples of temporary street closures particularly relevant for children are play streets, block parties and safe school streets initiatives.

In some cities such as Bogotá and Paris open streets happen weekly whereas in other cities such as New York, Toronto and Los Angeles the frequency is lower and seasonal. According to Dr. Sarmiento, there are 497 open streets programmes in 27 countries,[1] with most of them concentrated in the Americas. This ‘healthy epidemic’ of Open Streets, Gil Peñalosa says, is possible in any city that has streets and people. He emphasises that ‘the forbidden is fun’ quality it embraces is one of the reasons for its growing popularity and success.

An example of an Open Streets initiative

Bogotá’s La Ciclovía (meaning ‘cycleway’ in Spanish) is a long-standing Open Streets programme. Every Sunday and on public holidays (about 64 days of the year) between 7am and 2pm, 127 km of strategically selected networked streets connecting rich and poor neighbourhoods (as well as other public facilities such as parks, museums and markets) are closed to cars and reclaimed and reprogrammed for people. Residents of all ages, abilities and backgrounds use the Open Streets for activities like walking, jogging, picnicking, dancing, cycling and skating.

A map showing selected city streets temporarily closed to cars and their proximity to key public spaces during the Ciclovía in Bogotá. Source: Bogotá City Hall

The Ciclovía programme is complemented with the Recreovía Community Programme where spaces close to Open Streets such as parks, parking lots, kerbsides and store fronts are reprogrammed with activities particularly for women, children and the elderly. Activities include exercise classes, dance classes, arts and crafts pop-ups, and play events to better support physical activity, outdoor recreation and intergenerational bonding for these groups. This started off as a weekly programme in tandem with La Ciclovía, and according to Dr. Sarmiento, grew in frequency and size. The Recreovía programme now has over 66 hubs of free physical activity and outdoor programmes, many of which run six days a week and used by over a million participants annually.[2] 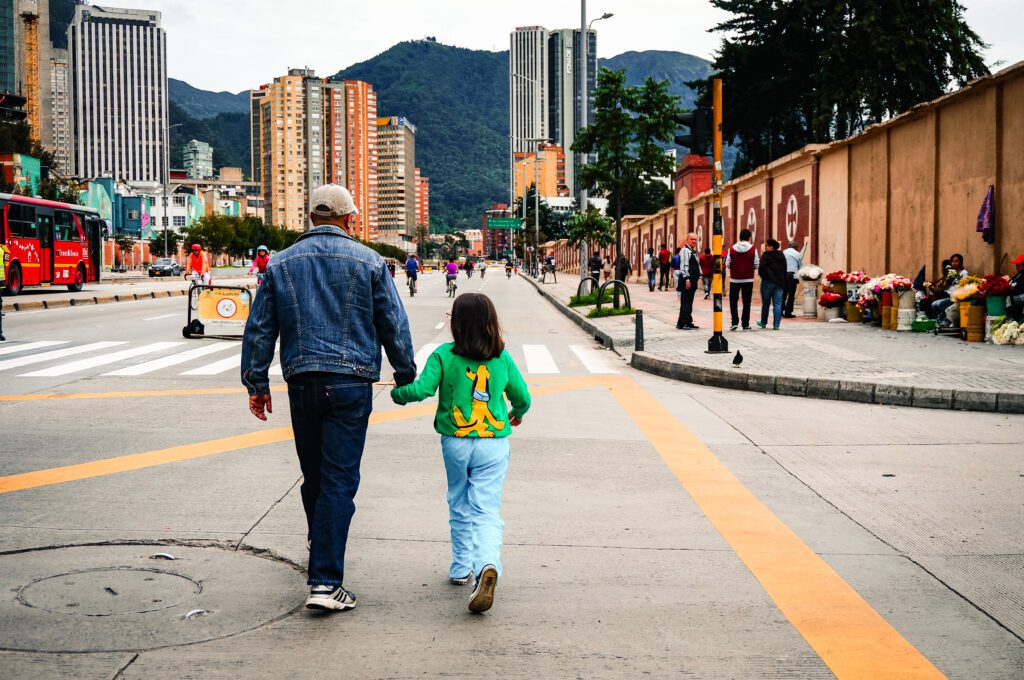 Why are Open Streets important for children, other residents and cities?

Open Streets support children to easily access their neighbourhoods and city, spend time outdoors, engage in physical activity, meet and make friends, spend time with families and enjoy the sights, sounds, smells of a city without cars, at least temporarily. All this supports children’s overall health and well-being and their participation in the public realm.

During the COVID-19 pandemic, as this blog shows, several cities across the world began and extended Open Streets programmes to support social distancing, children’s play, and physical and social activity. In some cities, these initiatives are becoming more permanent interventions lasting all year round. Reasons for cities to invest and support Open Streets are:

What are the key ingredients for successful Open Streets?

According to Gil Peñalosa, for Open Streets to be successful, they need to be:

Dr. Sarmiento also added that complementary programmes (such as the Recreovía Community Programme) which provide activities in proximate locations along Open Streets are also essential to involve children, women and the elderly. Other essential ingredients, according to Gil Peñalosa, include ‘enthusiasm, love, fun, commitment, vision, teamwork and communication, and branding and promoting the initiative using all forms of media’.

If you are interested in starting an Open Streets programme in your city, there are excellent tools available such as the Open Streets Project guide developed by 8 80 Cities, as well as this guide by the Alliance for Biking & Walking and The Street Plans Collaborative. There is also this short guide by the Sustainable Urban Transport Project and partners, and one on Ciclovías by a consortium of different stakeholders across Latin America, as well as country-specific ones such as this Open Streets Toolkit for South Africa and a Streets for All Toolkit relevant for Indian cities.

This webinar is part of a free bi-weekly webinar series A walk in the Park with Gil hosted by 8 80 Cities and World Urban Parks. Gil is founder and chair of 8 80 Cities, ambassador of World Urban Parks, and creator of this webinar. Dr. Olga L. Sarmiento is a professor of the Department of Public Health at the School of Medicine at Universidad de los Andes (Bogotá, Colombia) and has worked on multiple research projects about the impact of Ciclovía/Open Streets on mental and physical health.

[4] Cortinez-O’Ryan, A, Albagli, A, Sadarangani, KP and Aguilar-Farias, N (2017) Reclaiming streets for outdoor play: a process and impact evaluation of “Juega en tu Barrio” (Play in your Neighborhood), an intervention to increase physical activity and opportunities for play. PLOS ONE 12(7): e0180172. https://bit.ly/3A5uQzz

This work is licensed under a Creative Commons Attribution-NonCommercial-NoDerivatives 4.0 International License. When re-sharing this content please ensure accreditation by adding the following sentence: ‘This blog was first published by the Global Alliance – Cities4Children.