In the latest from our Ask an Expert series, we sit down with David Satterthwaite to hear more about his vast years of experience in the urban and environment space. David’s impressive research and writing has been cited more than 32,000 times. 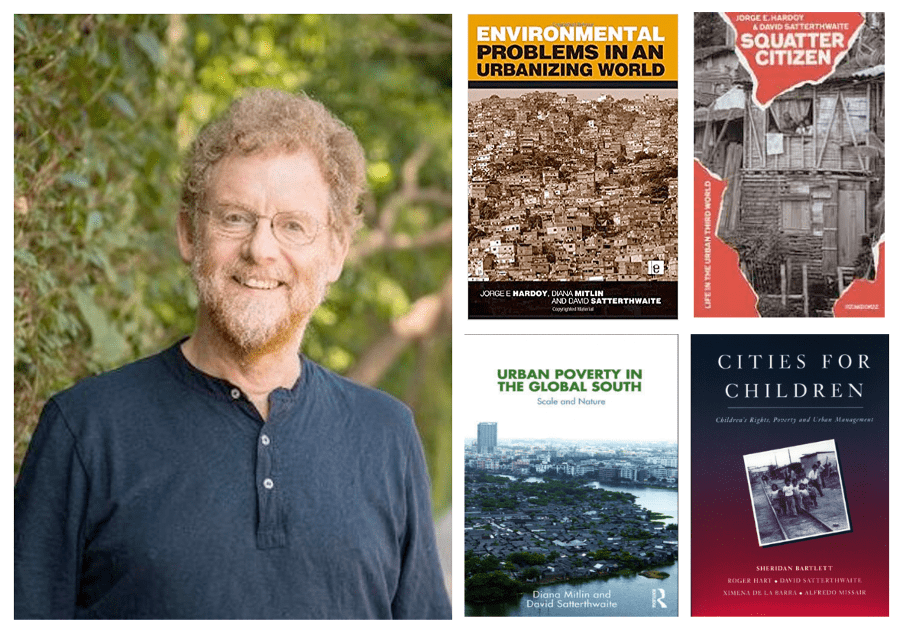 We would love to hear about your journey into urban planning and poverty reduction. Why did you decide to focus on this subject and what sparked your interest?

It was by chance. In 1974, I was planning to go to Canada to do a masters in theatre administration and I needed a temporary job. Barbara Ward was just developing a new Institute (the International Institute for Environment and Development/IIED) and needed someone to arrange her library. My temporary job and three-month contract turned into 47 years with IIED, first as Barbara Ward’s research assistant, and then as a researcher at IIED’s newly formed Human Settlements Group headed by Jorge Hardoy.

Working first for Barbara Ward, listed by Time Magazine as one of the most influential visionaries of the 20th Century, and then with Jorge Hardoy, one of the world’s best urban specialists, I was offered an alternative career. I would have been a fool not to take it. It’s worth mentioning too what a delight both Barbara Ward and Jorge Hardoy were to work with.

In your rich career so far, what has been your single biggest achievement, or accomplishment?

Without doubt, my work with the 32 national federations of shack/slum dwellers and Slum/Shack Dwellers International (SDI) and helping to document their work. We have published over 70 papers on their work in our Journal Environment and Urbanization.

Jorge Hardoy, Julio Davila (University College London), Diana Mitlin (Manchester University) and I founded this journal in 1989 to encourage Global South practitioners to write about their work. We never imagined that it would become among the world’s most cited and downloaded urban journals. In 2021, there were over 650,000 downloads. These papers in Environment and Urbanization showcased SDI’s resources, skills, and strategies, that were applied in hundreds of community-led informal settlements upgrading.

Each year, I went to India to work with the Indian NGO SPARC to learn both from their work and from the leader of India’s National Slum Dwellers Federation, Jockin Arputham who was also President of SDI.  What was so transformational was how Jockin and the federations developed working methods that put communities at the centre of development and brought in local governments.

This included community-led mapping of informal settlements – producing the data needed to plan the upgrading. This was quite a new way of working, and it’s one that inspired and guided me in my own practice. Many Federations also have youth federations that are important components and bring new approaches including using social media and films.

If I am allowed a second achievement, it is being in the Intergovernmental Panel on Climate Change (IPCC) team that received the Nobel Peace Prize in 2007. I worked on four IPCC Assessments, each addressing urban issues in more depth and detail than the previous one, and increasingly covering the risks and vulnerabilities facing so many urban dwellers and the needed adaptations. My work with the IPCC included being contributing lead author for the urban adaptation chapter from the Fifth Assessment. Much of your work has involved collaborating with institutions across the Global South. What organizations or programmes in the Global South have you found most exciting and promising in terms of delivering better living conditions for children and their families?

Working with Slum/Shack Dwellers International and its member federations has been a real career highlight, as has the way we worked to support federation savings groups and local NGOs in these spaces. And working with the Asian Coalition for Housing Rights (ACHR) that has been innovating on community-led development in informal settlements right across the region.

I also greatly enjoyed working with Jorge Hardoy as he set up IIED-America Latina and a region-wide programme of research and publications. IIED America Latina also set up a team to work with the inhabitants of informal settlements

This focus was very different to earlier work.

During the late 1970s and early 1980s, our work focused on assessments of government housing, land, and settlement policies – and in many nations, our work flagged their ineffectiveness. National governments were happy to commit to lots of progressive goals – for instance universal provision for water and sanitation – but few actually acted on these. Our work on the ground highlighted the importance of local government and non-government actors that were often ignored.

From the mid-1980s, we began to look more at civil society’s contributions where innovation existed, but it lacked scale. IIED-America Latina’s support programme for informal settlement upgrading highlighted how important community-led initiatives and changing relationships with local government were.

SDI and the ACHR also supported community-led initiatives– although with difficulties due to the unavailability or inflexibility of external funds. A $25 million grant from the Bill and Melinda Gates Foundation in 2005 allowed this work to expand, yet, despite its success, the funding was not resumed.

In the late 1990s, two child development specialists, Roger Hart and Sheridan Bartlett spent some time with us; our joint work included the book for UNICEF on Cities for Children. This work highlighted the vast inadequacies in the policies and services that children need, and what needed to change. Sheridan has also long been part of the editorial team for Environment and Urbanization.

What, in your opinion, has changed for the better over the past 20 years when it comes to urbanism, especially where it relates to children and youth in cities?

Some of what has changed for the better has already been mentioned above – community-driven upgrading and positive relationships with relevant local government departments. Here, the vital roles of informal savings groups where most or all members are women (and mothers) is getting attention and motivating action on highlighting the inadequacies in their settlements.

I think one of the key factors that can hold city governments back is the incapacity of official funding agencies to provide flexible, fast response funds to local government and civil society. Click To Tweet This can result in a slow pace of change and lack of urgency. Also, it’s demotivating for those waiting for the promised funding.

What is your biggest concern when it comes to the progress cities are making across the Global South in terms of creating better, more liveable cities for children?

After some 70 years of development assistance, there are still huge backlogs in the housing, infrastructure and services that are central to infant and child health and well-being. Now there is also the matter of managing the climate emergency that needs local governments to act and work with their populations with unprecedented scale and speed. And of course, managing the deaths and multiple impacts of COVID-19.

It’s critical that we make aid agencies and development banks far less centralized, less cumbersome and with a sharper focus on the local (local government, local community organizations, local services….) if they are to support the needed change at scale. There are also innovative cities to learn from, especially from Latin America.

I also recommend that city governments keep listening, keep expanding their capacity to plan, act and invest. Governments and councils must continue to be held accountable by parents and groups that prioritize children’s needs, to remind them of their responsibilities. Click To Tweet

Where city governments are incapable of providing public services, they should channel funding to local funds to support community provision. Support local funds in every city that respond to local priorities and that are accountable to community organizations. And work with government. Approximately 1 in 3 children in urban areas grow up in a slum. If you would advise governments to do things differently, what would you tell them?

We have to remember that the ‘slum’ often provides informal schooling and health centres, sanitation too. I would encourage governments to listen in on a meeting of a women’s savings group about how they planned to protect those most at risk from COVID-19, and also to consider the importance of local organisations that contribute to… Click To Tweet

Would you have any thoughts or recommendations for the Global Alliance – Cities4Children or our 25+ member organizations?

I recommend that they try out this model of local funds in cities where the urban poor are well-organized, their leaders are predominantly women, and where there are high levels of transparency and accountability to manage the fund.

The networks of SDI and the ACHR have worked in thousands of informal settlements in hundreds of cities and could start this and help draw in more civil society groups – and also supportive local politicians and civil servants. And lastly, I recommend always documenting and sharing learning within and between cities.

David Satterthwaite is a Research Associate at the International Institute for Environment and Development (IIED) and co-editor of the international journal Environment and Urbanization. He is also a visiting Professor at University College London. Most of his work has been on poverty reduction. His books include Squatter Citizen (with Jorge E. Hardoy) and two books on urban poverty (with Diana Mitlin). He contributed to the last four Assessments of the Inter-governmental Panel on Climate Change (IPCC). He was awarded the Volvo Environment Prize in 2004 and was one of the IPCC team honoured with the Nobel Peace Prize in 2007.