After decades of decline, global hunger and malnutrition are increasing. While on average urban children tend to fare better than rural children, one in three stunted children lives in the city.

In addition, rates of malnutrition are especially high among the urban poor, who must often face impediments to food security. Click To Tweet

The second Sustainable Development Goal aims to end hunger, food insecurity and all forms of malnutrition by 2030. Given current levels of hunger and malnutrition and the devastating impacts of COVID-19 and climate change, this is unlikely to be achieved. It is necessary to recognise that access to safe and nutritious diets is not simply a matter of improving food production and distribution. Rather, food security needs to be acknowledged as integral to poverty reduction initiatives, and intimately linked with gender inequalities and multiple dimensions of social exclusion.

The nature of urban poverty, in both its income and non-income dimensions, shapes how malnutrition affects urban children. Practices that best address it are grounded in a thorough understanding of specific urban contexts.

The links between urban poverty and food and nutrition insecurity

Lack of sufficient, regular income is at the root of urban food insecurity. Urban residents rely primarily on the purchase of food; for most of the urban poor working in the often-precarious informal sector, food makes up a very large part of their budget, and any decline in income or rise in food prices can have catastrophic consequences.

But income is only part of the picture. An estimated one billion of urban residents live in overcrowded neighbourhoods which lack basic infrastructure, services and adequate housing. Lack of storage space and refrigeration, together with a dearth of nearby larger food markets, makes buying food in bulk at lower prices virtually impossible. Eligibility for social protection programmes requires a legal address, all but impossible for residents of informal, low-income neighbourhoods and large numbers of internally displaced people and migrants. These neighbourhoods, often built on contaminated land or flood plains, are also disproportionately exposed to environmental hazards and vulnerable to extreme weather events, adding to the risk of a range of communicable diseases. In turn this exacerbates malnutrition and the ability to work and earn. 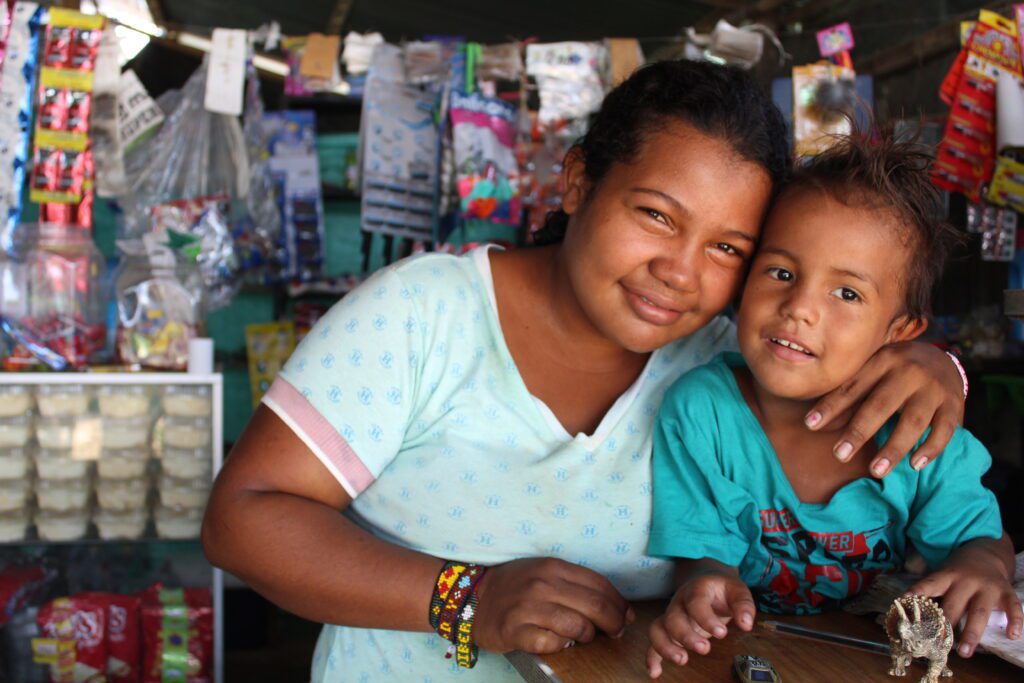 Deyanira hugs her youngest son in her shop located in an informal settlement in the capital city of Arauca, Colombia. Photo credit: Jenn Gardella, Save the Children

Gender roles and responsibilities are central to achieving food and nutrition security. Women are disproportionately responsible for making sure that there is food on the table, often at a high time and energy cost. For most urban poor women, earning an income is a necessity which involves long hours and which must be combined with care for children and weaker relatives, purchasing and preparing food, and often queueing for water from communal sources. Initiatives supporting childcare are essential to poverty reduction and to improve children’s nutrition.

Childhood malnutrition has far-reaching impacts and contributes not only to the high rates of death and illness among children under five, but also to health problems later in life and impaired cognitive development, leaving people trapped in low-skilled, low-productivity occupations.

Three dimensions are especially important to understand childhood malnutrition. Feeding practices are often undermined in the context of urban poverty:  breastfeeding can be difficult to maintain for mothers who need to return to work as soon as possible, and gruelling schedules together with inadequate cooking facilities can make it difficult to prepare food with the regularity children require. The larger food environment, with the widespread availability of cheap ultra-processed foods, sugary drinks and other foodstuffs with minimal nutritious value, is an important driver of both micro-nutrient deficiencies and the rising rates of overweight and obesity among urban poor children. Finally, unsanitary living conditions related to uncollected garbage, unsafe water, open sewers and poor drainage in overcrowded neighbourhoods result in chronic cycles of infection and malnutrition, especially for young children with immature immune systems.

The need to act in partnership with local communities

There is a growing consensus that urban children’s malnutrition requires multi-focused, integrated, contextually appropriate responses to adequately address its complexity. Nutrition interventions are far more effective when they are coordinated with efforts to address the broad range of underlying systemic concerns that affect nutrition – for example, the provision of childcare facilities and adequate WASH services. Concerns about children’s food and nutrition security also tend to be more successfully addressed when they are identified and responded to in partnership with households and communities.

One major problem in most cities is the lack of locally relevant data that can inform effective local responses. Coordinating with and supporting grassroots organisations of the urban poor is a good place to start, as they have a clear understanding of the intimate connections between food and nutrition security, and both income and non-income poverty.

Initiatives that prioritise supporting local capacity are also key in providing the long-time horizon that is essential to achieving change, with community organisations leading activities that address locally identified needs.

The role for NGOs, in short, needs to be less about the delivery of narrowly conceived projects and more about supporting the priorities of the urban poor and their relations with local government departments and other actors with whom to achieve city-wide responses.

To read more about malnutrition and children in cities, check out our evidence into action brief here

Dr Sheridan Bartlett is a distinguished researcher and author who works primarily on issues of urban poverty affecting children in low-income countries, bridging the gap between the work of child-focused agencies and the broader development agenda.

Dr Cecilia Tacoli is a Principal Researcher at the Institute for Environment and Development.